Death Valley really lives up to its name as being one of the hottest, driest, and lowest places in the world! It’s a sprawling landscape of vast valleys, barren salt flats, and rugged peaks. This park can easily be overlooked by some, but holds some breathtaking beauty in it’s vast array of geological colors and textures. Death Valley is the largest National Park in the lower 48 states at 3.4 million acres! In my recent visit, I only spent 3 days in the park (clearly not long enough to see everything) but here are some highlights and must see points if you’re planning a trip to Death Valley.

Badwater Basin is the lowest point in North America at 282 feet below sea level! The massive expanse of white is made up of almost pure table salt and consists of a small spring-fed pool of “bad water”. The accumulated salts of the surrounding basin make it undrinkable, thus giving it the name. Every year the area floods, covering the basin in a thin sheet of water, although it doesn’t stick around for very long. The water evaporates at an extremely high rate, dissolving some of the salt and then redepositing it as crystals. 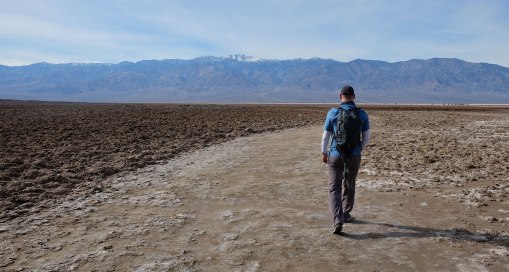 Another place of note along the way to Badwater Basin is Devil’s Golf Course. It was named after a line in the 1934 National Park Service guide book that stated “Only the devil could play golf” on its surface due to a rough texture from the large halite salt crystal formations. These jagged outcroppings stretch as far as the eye can see, at can even extend in height over 1000 ft deep in some parts!

Artist’s Drive is a one-way road traveling from south to north, an ideal side trek from those making their way back from Badwater Basin to Furnace Creek. Various mineral pigments have colored these volcanic deposits: Iron salts produce the reds, pinks and yellows; decomposing mica causes the green; manganese supplies the purple. This small area of Death Valley is home to half of the world’s minerals. 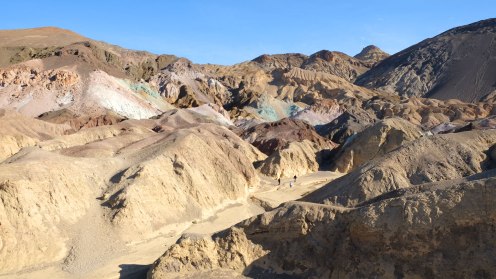 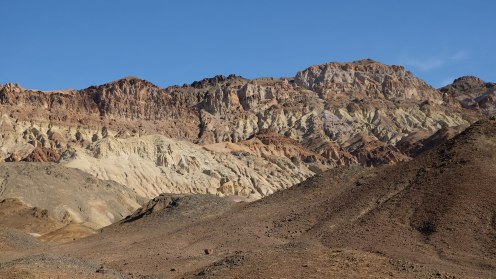 Desert sand dunes are the first thing to come to mind when one thinks of the quintessential desert landscape, but surprisingly the sand dunes only cover 1% of the national park. The Mesquite Flat sand dunes are the most well known and the easiest to visit in the national park. Located in central Death Valley near Stovepipe Wells. The neighboring mountains have trapped the sand and the prevailing wind has given them their shape over time. Off road vehicles are prohibited on the dunes but sleds are welcome! We visited the dunes right at sunset. As the sun disappeared behind the mountains it left a brief yet breathtaking pink glow over the dunes below. 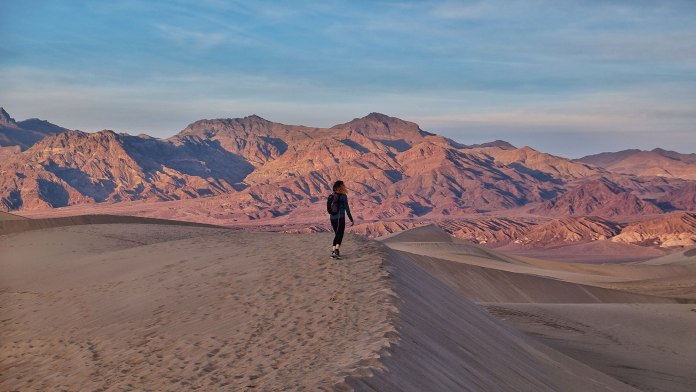 Best viewed at sunrise and sunset Zabriskie Point is a broad landscape of eroded rock, full of grooves, textures, and color contrasts. It’s composed of sediments from Furnace Creek Lake, which dried up 5 million years ago—long before Death Valley came into existence. The dark-colored material capping the badland ridges is caused from ancient lava eruptions. The point is easily accessible by driving to the parking lot off of highway 190.  Zabriskie Point can also be accessed through a 3.5 mile hike through Golden Canyon. I came back at night to star gaze. Almost had the entire area to myself to sit and soak in the dazzling night sky. 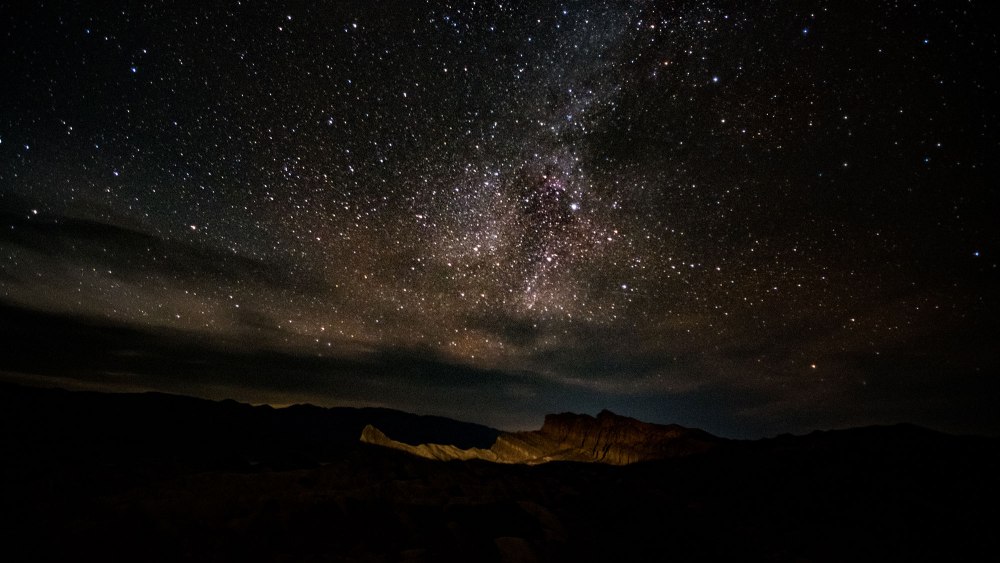 Dante’s View is one of the best places to enjoy a panoramic view of the southern Death Valley basin. It’s about 16 miles from Furnace Creek in Death Valley National Park. Only a short drive to the view point allows incredible views of Badwater Basin as well as neighboring Telescope Peak.

Dante’s View is part of the Black Mountains of the Amargosa Range made of Mesozoic volcanoes. The dark outcropping of rocks at the summit is a result of lava erupting and depositing on top of the preceding sedimentary rock. It’s aptly named from Dante Alighieri, who wrote the Divine Comedy, in which he describes the 9 circles of hell. 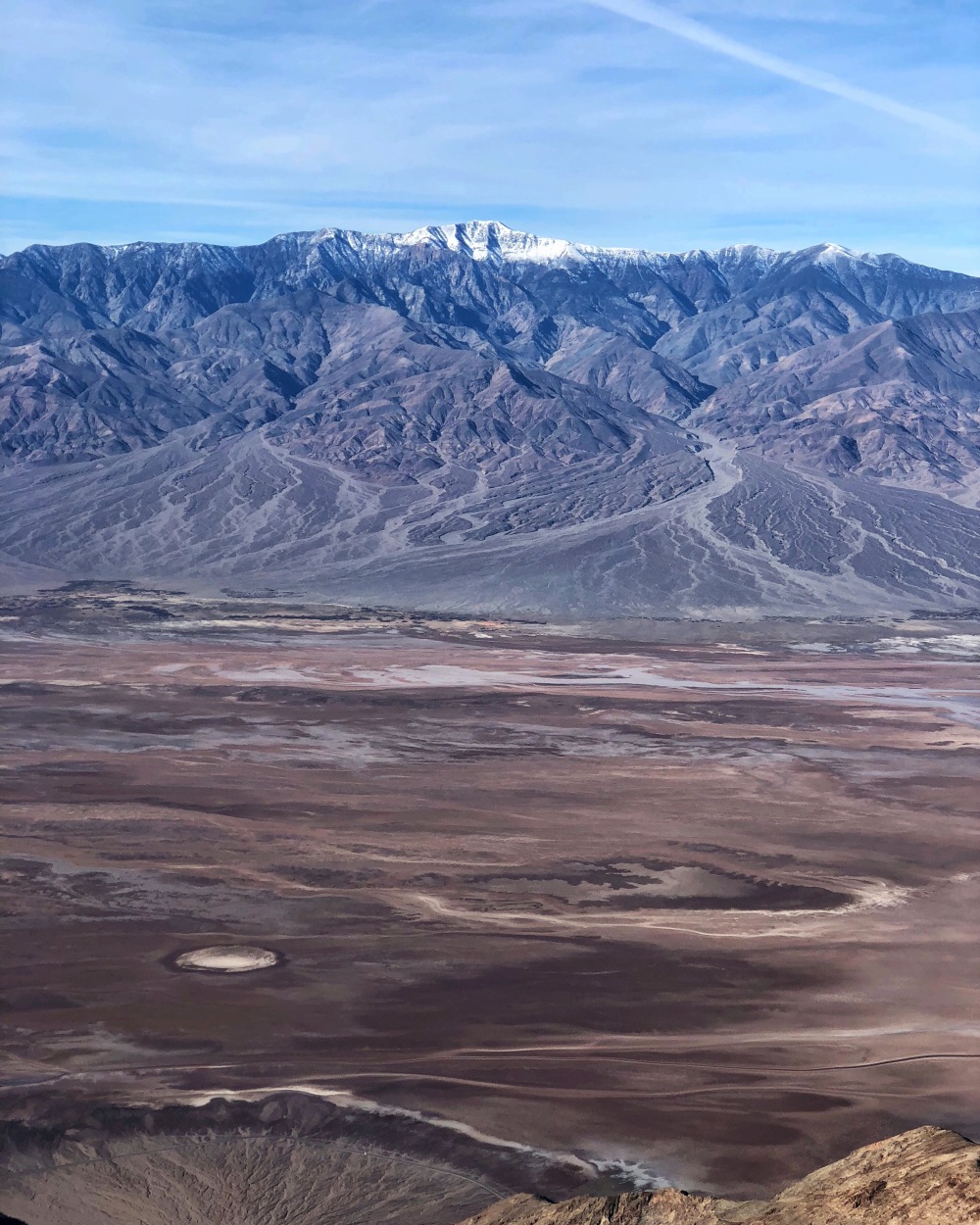 The Trona Pinnacles are not located in Death Valley National Park, but is quite an intriguing place to explore! I made a quick stop along the way to Death Valley to see these strange rocks for myself. Located about 100 miles from the park these odd rock formations are “tufa spires” composed primarily of calcium carbonate. There are approximately 500 spires that are slowly cracking and eroding. They were formed some 10,000 to 100,000 years ago when the surrounding area was submerged in water. After the water evaporated, the area was left with these strange calcium carbonate tombstones. It looks like an alien landscape and no surprise is seen in multiple hit movies and television shows like Battle Star Galactica, Planet of the Apes, and Star Trek V: Final Frontier.

If you’re curious about visiting more “tufa towers” check out my blog post about Mono Lake, Exploring the Bizarre and Beautiful in Mammoth Lakes. 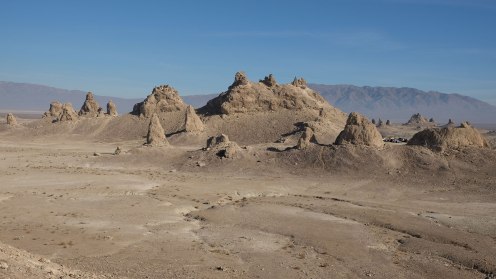 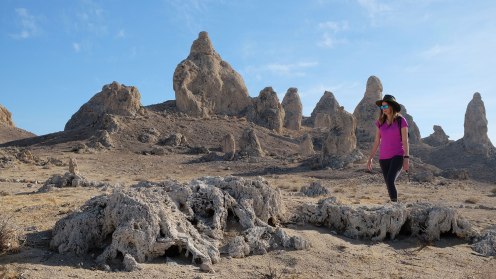 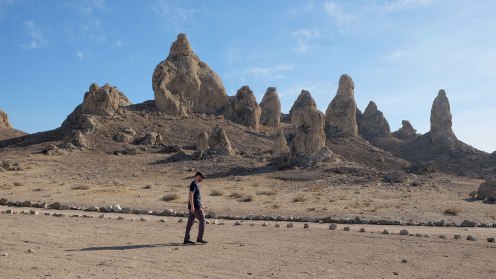 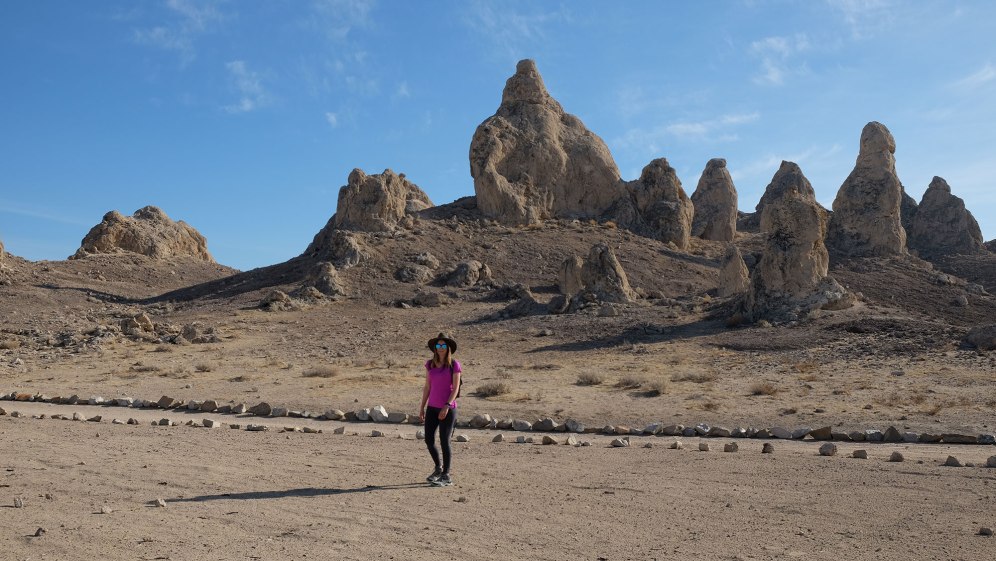