One of the most unusual places we explored while driving through Southern Utah was Goblin Valley State Park. This alien like place features thousands of Hoodoos or “goblins” as the locals refer to them. These distinct mushroom like rock formations are formed from the gradual erosion of sandstone, deposited about 170 million years ago when the area was situated next to an ancient sea.

We were free to climb the hoodoos as long as we left the park in the exact state we found it in. Sadly, in October of 2013 a boy scout leader intentionally knocked over one of the hoodoo rock formations. The leader was right fully discharged from the boy scouts and slapped with a hefty fine! The hoodoo he vandalized was millions of years old, having formed out of rock that dated back as far as 165 million years. I often hear about acts of vandalism and it pains me that people feel they must destroy a natural monument. We should leave these places without a trace.

Exploring this park felt like you were on an alien planet (no wonder it was featured in the movie Galaxy Quest!) Vegetation and wild life is limited. Even though it was quite warm out we had to bundle up in wind breakers and handkerchiefs to block out the gusts of dust that would blow through. Although, Goblin Valley is not a traditional beauty, it is a hidden gem of Southern Utah and worth exploring! 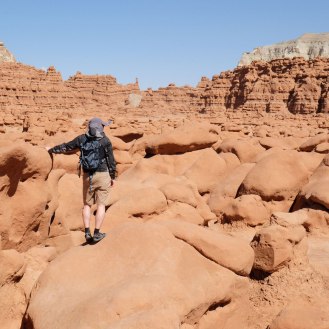